Los Angeles 1941, young Carl N. Karcher and his wife, Margaret, made a leap of faith and borrowed $311 on their Plymouth automobile, added $15 in savings and purchased a hot dog cart.

One cart grew to four, and in less than five years, Carl’s Drive-In Barbecue opened with hamburgers on the menu.

On his first day in the fast-food business, Carl N. Karcher took in $14.75. A thousand restaurants later, Carl’s Jr has become known as the place to go all across the West for juicy, delicious charbroiled burgers.

Everyone knows you can get a great burger at Carl’s Jr but not everyone knows that the first menu items were hot dogs and chili dogs. Originally sold at Carl Karcher’s hot dog cart for twenty cents, the Jumbo Chili Dog remains true to the original vision of selling good food at a fair price.

My Name Is Marshall Bump

I have many obsessions. One of them is the hot dog. 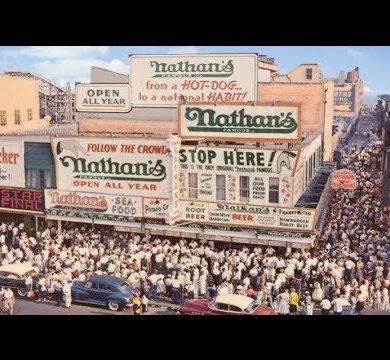